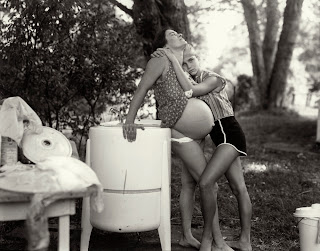 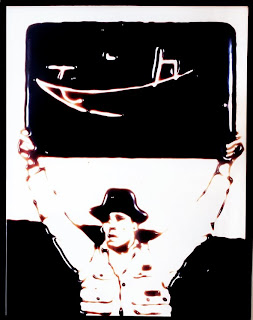 On Wednesday I shall be part of the group of speakers talking about collecting photography in conjunction with the exhibition, 'HIGH SPEED iNSANITY' which is a collaboration between PUG, Mr. Jack Helgesencalled & FOTOGALLERIET in Oslo, called 'Who Holds the Power to Collect?'

PUG (Pop up gallery) is headed up Ellen-K Syverstad & Anette Skuggedal. I first met Ellen K at Paris Photo 2010 & am looking forward to working with her briefly this week.

Established in 1977 Fotogalleriet is unique in Oslo as the only Norwegian institution devoted to camera-based art. They show Norwegian as well as international contemporary artists.

HIGH SPEED iNSANITY:
Slow down. Be present. – Run away. Escape. – These solutions describe opposite extremes of what most people have to deal with every day. We are supposed to be both normal and special at the same time. How do we cope? The selection photographs chosen are curated to navigate through the obstacles of life in a visual cacophony of imagery made by some of the worlds leading photographers. The show includes the following work:

I am not sure yet exactly all of images which will be included in the show, but can't wait to see as it will be a wonderful surprise. More on my return...
Posted by Laura at 10:36 No comments: 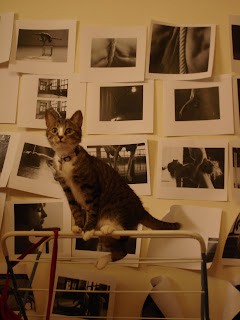 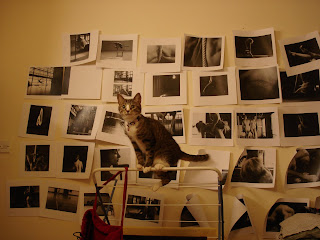 When I wrote the essay for Bertil Nilsson's book 'Undisclosed' and helped Bertil & the designer Wayne Ford (who is also a serial blogger see his blog here) I papered my entire kitchen with the images (as seen here with my cat hogging the limelight for a change) so that I could get to know them intimately & see new things in the work every day. A great image reveals itself to you slowly. My personal favourites at first glance may then change & finding specific elements of interest & connections between the works, rhythm's & themes all surface with prolonged study.

This beautiful work documents & explores the working practice of circus performers in their practice spaces. Nilsson's black & white photograph's mesmerise as the performers display deft feats of artistry, strength & agility. With close contact to them we are seduced by the poetry of the human form without the trimmings of the costumes & glamour that usually accompany them. In doing so Nilsson strips back the practice of these individuals to their bare bones & indeed muscle. The combination of their bodies entwined with the architecture of the practice spaces & interaction with their equipment creates a visual theatre all of its own.

When we arrived the book as a first draft pinned onto the wall. It soon became clear to see the flow of the book with the layout in order across the room. Any discarded images were also out for us to look through and make suggestions. Each of us lost an image we liked in the final edit, but all agreed that they did not fit into the book. This process always takes longer than one would first think, but with 3 pairs of trained eyes it was a thoroughly enjoyable day. The camera in the corner filmed this wonderful sequence, putting all our efforts into a minute long film. Having a large space to lay or pin out the work is invaluable & a lot more effective for the final book. This can be done on a computer of course - but the book is not going to be made to view on a computer - so I find it easier to get a real 'feel' for a book by moving spreads around physically, literally not on a screen. We all worked well together, agreeing on most things which made the whole process very enjoyable.

We all left the studio with a satisfied feeling of a job well done. 'Undisclosed' will be launched in August. I will post nearer the time to remind you lovely readers of its impending arrival.
Posted by Laura at 11:07 No comments: 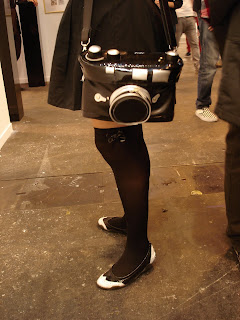 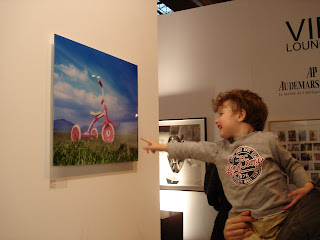 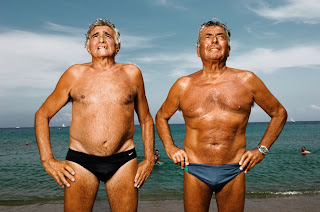 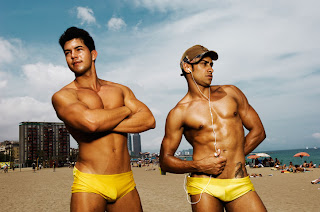 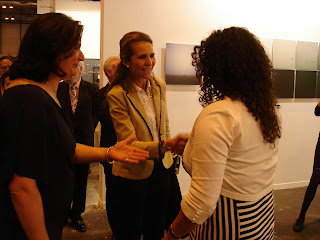 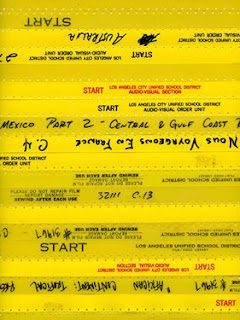 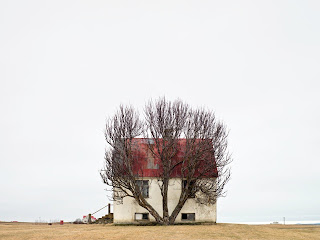 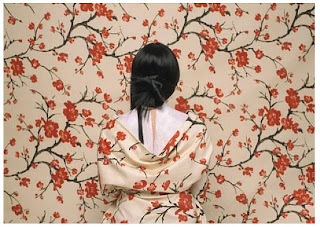 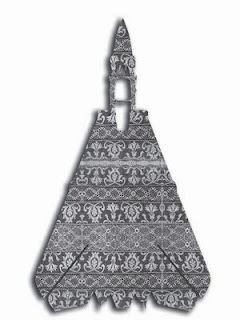 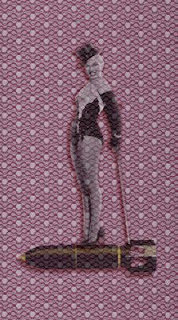 In this, the third edition of Madrid Foto, both the variety and quality of work on display was extremely high. Predominantly featuring Spanish galleries, with a strong French and Portuguese contingent, the location at IFEMA (situated very close to the airport) meant for a pleasurable easy destination with all the facilities and transport links that you would expect from an international art fair. Boasting fifty galleries exhibiting their artists, it is a manageable fair to spend a day or two without photo-overload setting in. With its focus on contemporary photography, the prices are also more affordable than vintage based fairs, thus it is perfect for first time and experienced buyers alike.

As our first foray at the fair Diemar/Noble Photography was pleasantly located next to the VIP area & opposite the free Expresso bar, which proved excellent for all concerned. Mishca Haller's work was very popular, especially with the kids as you can see here, with many toddlers keen for their parents to buy them this work in particular. Can't imagine why?

Then there was the ultimate insult with a young boys pointing to Lluís Artús' 'Catalan Gentlemen' & shouting, ''Daddy, daddy it's you!" This would have been fine had it not been placed next to the Brtazillian boys, who were somewhat younger & fitter than the 'gentlemen' next door.

Certainly photographers and students were out in force as well as collectors. The daughter of the King of Spain, Infanta Elena, Duchess of Lugo (Elena María Isabel Dominica de Silos de Borbón y de Grecia) visited the fair also, adding a little glamour to the proceedings.

The small presence of vintage work also encouraged new collectors to perhaps venture further into the genre. Historically, vintage works are more sought after by those collecting photography for their market worth as well as artistic merits. However, collecting contemporary work has its benefits also as the contemporary work of today becomes the vintage work of tomorrow. With more chance of building a personal connection to the photographer and supporting both them and their work, contemporary photography collections are an exciting way to experience the best photography, as an art form has to offer. During Madrid Foto I had the opportunity to meet many of the artists displaying their work at the fair. This unique opportunity especially with Spanish photographers meant that my knowledge was broadened as to the themes and concerns raised in their work. Gallerists were friendly and approachable, showcasing many photographers I had never come across before.

The overall aesthetic of the fair was bold and bright. Strong colours permeated throughout, with striking statement pieces such as Ricardo Valentim’s (Galería Pedro Cera, Portugal) huge bright yellow (on display, there are more colours in the series) ‘Start Series’ where the beginning of film reels from educational films from the collection of ‘Los Angeles Unified School District’ are laid alongside each other to produce a wall of colour (200 x 150 cm) punctuated with text, giving clues and new contexts to the original objects photographed.

Landscapes were also dominant features in the fair from the hard red, white and blue angles of Álvaro Sánchez-Montañés’ Verönd, 2010 in a contemporary topographical style, to the green-toned nightscape Exterior Night 17, 2003 by Christophe Dugied. More ambient and abstract landscapes depicting natural phenomena such as icebergs, reflections or the sea could also be seen to re-occur in several booths. Furthermore architectural imagery and architectural abstractions and interpretations were consistent throughout, using varying degrees of artistic license and Photoshop. There is a sense of adventure in the choices of works that were on show, taking risks, which may be a little louder than the usual photography fair fodder. It was refreshing to see many new works that had not done the rounds of previous fairs numerous times, keeping the feeling of the venue buoyant and lively.

A sense of play could be found in figurative work bordering on the surreal in many cases like Peruvian artist Cecilia Parades’ Asia 2008, of the Paisaje series, whereby a Japanese woman stands with her back to the camera wearing a patterned gown matching the wallpaper of the wall she is facing or Walter & Paloma’s (Walter Martin & Paloma Muñoz) ‘An Abduction’, 2010 as a tiny figure of a toy boy is dragged in the snow by a man (also a model or toy). With deep traditions in the Surrealist movement Spanish artists have dominated, yet Surrealism’s influence on contemporary art still pervades today in the works of photographers using the new technology available to them to bend the truth in order to create fantastical imagery.

Conceptually there were very fervent series of work on show, my favourite and indeed favourite of the entire fair was a body of work entitled ‘Intelligence series’ by Norbert Francis Attard, using lace and images of bombs, planes and even Marilyn Monroe to create riveting imagery.

The crossovers into other mediums were also in evidence, incorporating installation, sculpture, painting and collage into the photographic genre to great effect. There were several backlit works achieving varying degrees of success, some even on canvas. Whatever your taste there something for everyone and well worth a visit.