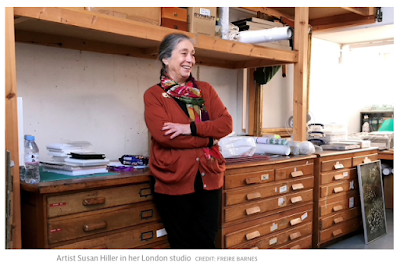 Today I was greatly saddened to learn of the passing of Susan Hiller. I met, interviewed then wrote my dissertation on her work many many years ago, as a young art student. This is a short personal reminiscence of a love affair with her art, one which will continue long after I am gone... 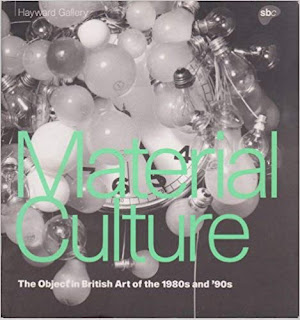 I initially that my love of Susan Hiller's work began at a group exhibition at the Hayward Gallery called Material Culture - where her From The Freud Museum piece was displayed; I fell in love instantly. I bought the book of the same name & returned to see the work several times during the run of the show (as I was working at the National Theatre part time & could get free entry to exhibitions on the South Bank). Notably, two of my other favourite artists Mona Hatoum & Cornelia Parker also had work in the show. Publisher: Routledge
1991
In fact, my exposure to her work had begun years earlier with a book The Myth of Primitivism: Perspectives on Art which I had used frequently when studying in Australia. Introduced & compiled by her, the book is still one of my favourites. Hiller's earlier career as an anthropologist informed her work as an artitst in ways that always added layers to her concepts & aesthetic thus deepening & sustaining your attention long after the first look. I have returned to many of her works over the years for inspiration & as a signpost to others when mentoring artists. The human condition combined with her deep understanding of many cultures outside of her own many times resulted in me saying the phrase, "All roads lead to Hiller." For me, she is to art what Kevin Bacon is to cinema.

During Material Culture I attended a talk - an informal one with around 100 of us standing in the space. Hiller alongside Richard Deacon. I remember vividly that he didn't see her works as true sculpture due to the fact that she used found, antiqued & used objects as well as custom made boxes in the piece. He felt that the artist must make everything with their own hands. I did not agree & when the floor was open for questions I was quick to ask Susan about her work. After asking my question Deacon sat on the floor & did so for the rest of the q&a. 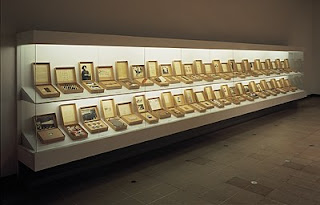 ©Susan Hiller From the Freud Museum
1991-96
Afterwards, I approached Susan to see if I could interview her. At the time we had been asked to review the show, but I knew straight away I was onto something special & had to seize the opportunity, for more than just a review. I think because of Deacon's response it helped my cause & Susan was happy to be interviewed. She instructed me that the questions 'better be good' - I respected her for that - I didn't want to waste her time. Her self assured nature demanded instant respect. You were in no doubt that Susan knew what she wanted & her inquisitive intellectual nature would expect no less than excellence.

The interview was as insightful & as mind-widening as I had hoped. My resulting dissertation focused on just 3 of the 50 custom archival collecting boxes in the From The Freud Museum work. (Yes, I did get a distinction for it).

I had absorbed myself in all of her works, seen as many as I could, but this piece consisted of so many layers it would have been criminal to sweep over them, hence my focused approach. I still rejoice whenever the Tate (who purchased it the year after the Material Culture show) display it, or any of her work for that matter. 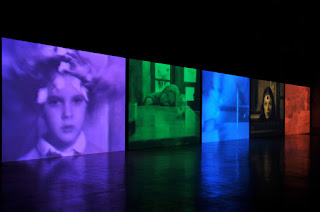 Psi Girls at Delphina, was another amazing installation in 1999. It is not lost on me how fortunate I was to be in the room with the work alone one mid week afternoon. Absorbing the telekinesis depicted in film with female protagonists including Firestarter with a young Drew Barrymore - the videos build up to a crescendo & it is impossible not to be affected by it. As with many immersive installation pieces I was utterly drawn in & moreso thanks to my solo status. I never experienced the same intensity again when I saw it elsewhere. 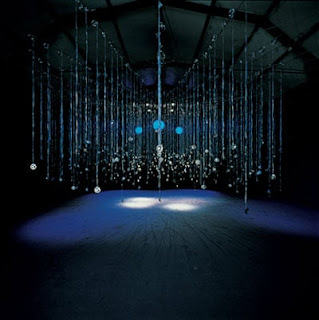 The same could be said for Witness - the venue with its arched roof combined with the work had so much more atmosphere & suited the multiple recordings of UFO sightings around the world than a gallery. The disused chapel was cool, with a smell of stone which heightened the dramatic lighting. UFO shaped silhouettes & shadows were cast on the walls from the stripped back earpieces dangling at different lengths throughout the space.
I was thrilled to see her in person again at her retrospective show at Tate Britain years later. I was also delighted that she remembered me & we had a brief catch up. Whenever I saw her she was always generous, fascinating, direct, clever, funny, an absolute mine of experience & intellect & of course an ardent feminist. Her work has influenced so many, & will continue to do so. We are lucky that her works are owned by many public collections. Most recently I listened to her voice on the tape of her piece Monument (at Tate Modern) which celebrates unknown heroes whom lost their lives whilst saving another, full of extraordinary acts of bravery by ordinary people. 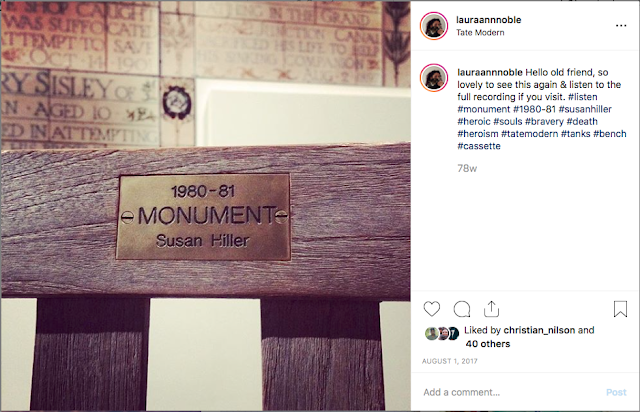 I took this last time it was on display at Tate Modern
I recently came across the cassette tape (yes that long ago) with our conversation fro my dissertation. I'm so glad to have her voice at hand from all those years ago. For those of you who haven't heard it when Tate next displays Monument 1980-81 do take the time to sit & listen to the whole thing & be kind, rewind afterwards...

*A previous blog I wrote about Susan Hiller can be seen here.
I could write about her for days, please read further on her work you will be glad you did! 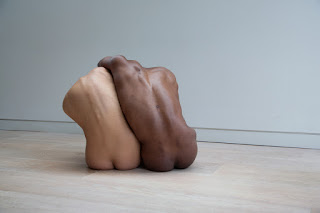 I was absolutely thrilled when artist & writer Lisa Holden was inspired to write this wonderful text about the current LANG exhibition Form & Function by Chloe Rosser on display at Photofusion in Brixton until 18 June 2018.  It is a pleasure to have this as a guest post. 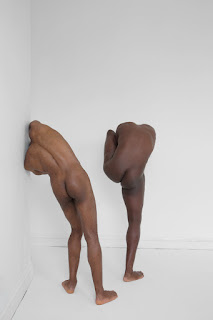 Chloe Rosser photographs the human body, naked, contorted, within the confines of plain domestic spaces. Her models strike sculptural poses – they lean, sit, slant, twist – but always avoiding references to classical statuary or art historical nudes. And Rosser’s models never show their faces. So, what’s going on?  By anonymising her sitters, and accentuating skin tone and gesture, Rosser’s images could almost be interpreted as a conversation about identity. After all, photography is a medium that lends itself to concocting identities through disguise, concealment or digital tweaking. But both of these series can also be read differently. The images shift constantly from the specific to the abstract, hinting at a totemic, symbolic meaning. The contours and shadowing suggest archetypal shapes and remind us of the clay figurines and artefacts from prehistoric cultures. Perhaps Rosser’s human ‘forms’ are also an invitation to imagine the body not simply as a thing of flesh and bone, but as a tool for tapping into the collective memory of mankind, the genetic code within ourselves. 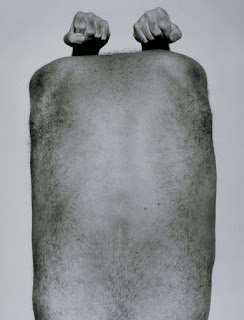 Seen in this light, Rosser’s models are anything but anonymous; they are universal. They are us, we are them. And if the body is capable of accessing this primordial coded language, then Rosser’s subjects, photographed singly or in groupings, can be read as a visual expression of something primordial and ancient. Something the late photographer John Coplans (with whom Rosser’s work shares some common ground) calls ‘a memory of our past ancestry’. Coplans – born in London and originally trained as a painter – photographed his own body in later life, depersonalising it, turning into a play of light and dark, mass and form. 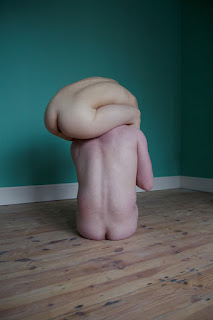 Rosser’s approach to the body is not dissimilar –  her ‘forms’ are equally abstract, almost bordering on the surreal. Unlike Coplans’ grainy black and white imagery, however, Rosser’s visual language has an almost brittle clarity. The formal execution of the images contrasts with the models’ soft flesh, knobby spines and straining muscles. And draws us in, to look closer and pick up on other contrasts – skin against laminate wood, against plaster, against carpet. A thigh disappears into a wall. Shoulders are shoved into a floor. The sense of the surreal, even the uncanny, is unmistakable. What are we looking at? Why are these forms here, in these spaces? What are they doing here? 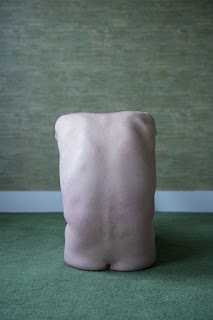 The models in Rosser’s photographs may pose alone or together – some are total strangers, others close companions. Always calm, respectful.  There are no divides here. Framed by neutral spaces, Rosser’s ‘forms’ tell stories, and some are about us – snatches of collective memory that speak of what has been and dream of what may come.
©Lisa Holden

NEWS
Chloe Rosser & Laura Noble are running a full-day workshop, Exploring the Body in Photography - on Saturday 16th June at Photofusion. This will include live life models, strictly limited to 10 places. There are a couple of places left. You can find all the details here.
Email: hello@lauraannnoble.com to book.

Chloe Rosser’s first book, Form and Function, is in the making! There’s still time to get involved with the Kickstarter campaign. The Kickstarter ends at 5.30 pm, 18th June. Here's a link if you would like to support it. Thank you